How to Successfully Mix Genres

I’m taking a few weeks off to move and concentrate on marketing KEEPING SCORE. While I’m gone, I’m lucky enough to have some author friends taking care of my blog for me! They have also been spreading the word about KEEPING SCORE. I wish they could come to Florida and help with the packing, too.

Today I’m lucky enough to have Caroline Fardig here to talk about mixing genres, as she does in her bestselling novel, IT’S JUST A LITTLE CRUSH. I’m very lucky because Caroline is incredibly busy… IT'S JUST A LITTLE CRUSH has been #1 on B&N's Humor Bestsellers list for four straight days! Get your copy now while it’s still on sale for $0.99 (through tomorrow)at Amazon and Barnes & Noble.

When Jami and I were trying to come up with a good topic for a blog post, she said, “Your book is part mystery and part chick-lit romance—why don’t you talk about how to mix genres?” I mulled it for a while and decided it was a great idea! And I am going to talk about how to mix genres in your writing, but I’m going to explain it by using a movie as an example. I love movies (even more than books *gasp!*), and as long as I can remember I have always wanted to be a movie critic, so someone would pay me to watch movies all day.

We’re the Millers is the #2 movie in the country right now, and for good reason. It’s FUN. (Even better, I got to see it at the drive-in in my convertible!) 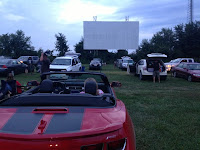 We’re the Millers is also very raunchy, so if you don’t have a sense of humor, don’t go see it. That being said, I think the writers blended a lot of different elements into the movie to make it very interesting. It’s not just your typical raunch-com.

They added some action in the form of car/RV chases and hand-to-hand fighting. It made the movie exciting and broke up the comedy so it didn’t become just a series of one-liners. Action and comedy seem to go well together, but if the movie had been all action, with Jason Sudeikis and Jennifer Aniston as the leads, it would have been a bit unbelievable, don’t you think? You can do the same thing with your writing. Let your big, strong hero have an off-beat sense of humor. Every little quirk you can give your characters gives them another facet to their personalities.

Who doesn’t love a little romance? We’re the Millers added some romance, both adult and teen—and the teen one is super-sweet. Sudeikis and Aniston had good chemistry throughout the movie, and you were rooting for them to get together. Sorry if you think that was a spoiler—it’s pretty obvious that they like each other but won’t admit it. In writing, give your characters something else to do besides go to work and come home to an empty house. If you do it right, your characters “will they or won’t they” can be as suspenseful as your plot.

Surprisingly, there’s also quite a bit of drama in the movie, but they don’t let it get too heavy. They deal with the subjects of broken families, broken dreams, self-confidence, right vs. wrong, and the dangers of drug dealing. Pretty serious stuff, but because it is masked in humor, it’s not too much of a downer. It’s pretty great if you can work in a “lesson learned” into your writing, especially if you’re writing a series of books. Readers love to see their favorite characters grow, and it definitely adds depth to them.

Just kidding. But if they had thrown in a couple of zombies, they would have had nearly every genre covered!

Just remember—don’t let your genre label dictate your writing. If your character needs to do something wild and crazy, let her! If she needs to have a big, emotional breakdown, let her. Allow your characters to experience many emotions and situations, just like in real life. It will make your writing more believable and much more fun!

CAROLINE FARDIG was born and raised in a small town in Indiana. Her working career has been rather eclectic thus far, with occupations including schoolteacher, church organist, insurance agent, funeral parlor associate, and stay-at-home mom. Finally realizing that she wants to be a writer when she grows up, Caroline has completed her first novel, IT’S JUST A LITTLE CRUSH, and is currently hard at work churning out a second novel in the series. She still lives in that same small town with an understanding husband, two sweet kids, two energetic dogs, and one malevolent cat.