If there were a lifetime achievement award given to the movie actor who has made the most stupid movies, Will Ferrell would be a shoe-in. Everyone has their favorite: My son loves “Stepbrothers;” “Elf” has become a holiday classic. My favorite is “Talladega Nights” – not because it’s funnier than the others, (and despite all the annoying product placement) but because it relies on the standard sports movie tropes, emphasizing their truths in the process. 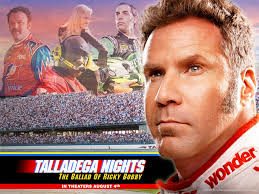 As a sports mom, I am particularly interested in these kinds of messages, messages that emphasize the lessons my husband and I tried to impart to our son when he struggled. Many sports movies, however, hit viewers over the head with those messages, becoming preachy and less entertaining.


It is very entertaining watching a man try to drive a car with a cougar in the back seat.


Talladega Nights’ hero, Ricky Bobby, was introduced to speed when his father hit dizzying heights driving his laboring mother to the hospital. Unfortunately, his father, Reese, left a few years later, but not before giving his son these words of wisdom: If you ain’t first, you’re last. The memory of those words and Ricky Bobby’s love for speed drove his racing career. He was at the top until an accident at the track left him with psychosomatic paralysis. In short order, his wife left him for his best friend Cal, his racing company fired him, and even after a knife to the leg proved he wasn’t “so paralyzed,” he was forced to move back in with his mother and two feral sons, and take a job delivering pizza. Eventually, though, thanks to the cougar, help from his mom, and a pep talk from his former assistant Susan, Ricky put together his own driving team for Talladega. He doesn’t win – he gets into an accident with his French rival, and they cross the finish line on foot, while gives Cal first place – but he learns all those important lessons that sports movies teach:


Winning isn’t everything.
 Losing isn’t everything.
 Don’t let success go to your head.
 Don’t listen to people who tell you you’re not good enough.
 Get back on the horse.
 Learn who you can trust, and who has their own agenda.
 Be open-minded toward those who are different.
 The brainy girl who gets you is a better bet that the self-centered hottie.

Did you miss the fact that universal lessons were being taught as you laughed at Ricky Bobby’s ridiculous dialogue and crazy situations? Probably. The jokes are hysterical. I could watch on a continuous loop Ricky Bobby running from the invisible fire while praying to every god known to modern man. (Okay, Tom Cruise is no longer a god.) And the list of funny quotes on IMDB is probably ten pages long.


But the reason why this movie resonates with audiences beyond teenage boys and men who love fart jokes is because Americans grow up on sports movies, and the lessons they teach are ones that we use in our daily lives, even if the only sports we’re involved in are the ones that entail sitting on the couch and watching other people play.


Next up: My very good friend Melissa Amster. I’m dying to see what movie she picked!