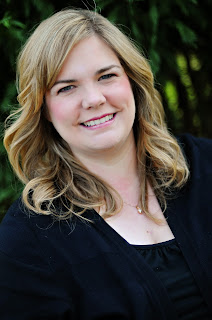 I am delighted to welcome Caroline Fardig to my blog to mark the release of her third book, Bad Medicine! Caroline and I swapped emails a few weeks ago to talk about her journey from self-published writer to author with an agent and a book coming out with Random House …

It’s been a whirlwind couple of years for you. The first Lizzie book came out in January 2013; the third is out this month and the first book in your Java Jive series will be released in November. What are your secrets for being so productive?
I work too much. Ask my husband. Writing is my full-time job, and when I’m not writing, I’m thinking about my plotlines and typing emails to myself on my phone. I’m very focused, and when I get in a zone, I can pound out over 2000 words a day. Unfortunately, sometimes when I get in a zone, I forget to eat lunch.

What are some of the challenges in writing two series at the same time?
Keeping the voice separate in my head, and especially the tense. Lizzie is present tense and Juliet is past. And sometimes I’ll mix up minor characters between the two series.

What are some similarities and differences between your two heroines, Lizzie Hart and Juliet Langley?
Lizzie is much dingy-er than Juliet, and she overshares way too much. She has no filter. Juliet is more of a grown-up and has a much sharper tongue. They react differently to situations and definitely differently toward their men. As for similarities, they’re both smart, sassy, and fearless.

Lizzie lives in a small town, while Juliet’s story takes place in Nashville. What are the advantages and disadvantages for setting a story in two such different locales?
An advantage is appeal to readers. Some people like small town settings, and other people like a story in a larger city, especially one they’re familiar with, so my writing as a whole has a further reach. As for disadvantages, the hardest part for me with Juliet’s story is introducing new characters to her. She doesn’t know every person in town like Lizzie does, so she doesn’t have an established “history” with everyone.

Both series are funny murder mysteries. How do you maintain a consistent tone and manage to be funny and suspenseful at the same time?
I have to keep my head on straight and not get too personally involved in the story. When writing in first person and trying to convey the character’s emotions, you as the author end up reacting as well. And even though you can’t be insensitive about death, you also can’t get bogged down in mourning, and neither can your characters. There’s a fine line between comic relief and coming off callous.

What kind of research is involved in plotting ways for people to die?
A lot, actually. If someone looked at my web browser history, they’d probably arrest me on the spot. Even though the premise of my mysteries is a little far-fetched (when was the last time you saw an office worker or a barista out fighting crime?), I like for the rest of the story to be believable. I always try to make sure that my manner of death would indeed kill someone, not just maim them. I’ve also recently taken a forensics class at a local college, and I gained a wealth of information.

Your first Lizzie book was self-published, and did well enough to attract an agent’s attention. Java Jive is being published by Random House. Your story is certainly an indie author’s dream! Can you talk a little about the highs and lows of the process?
Some days it really does feel like a dream! The highs were definitely the call from my agent saying he wanted to take me on as a client, and then the email saying Random House was interested in me. The lows were of course all of those “no” responses to my query letters, as well as the passes from publishing houses on my Lizzie series. However, I have a great agent, Ethan Ellenberg, and I couldn’t ask for a better editor than Julia Maguire. She’s chronicled our progress on DEATH BEFORE DECAF in her blog.

You list an eclectic collection of jobs in your biography page. How has having such varied experiences helped and hindered you as a writer?
I think my unusual jobs have only helped me. In every profession, you deal with different types of people and experiences, and you have to handle them all differently. In insurance, I had to be both empathetic and skeptical when customers would submit claims. In the funeral business, the emotional side was difficult to deal with, and as a worker, you had to be able to bottle up your personal feelings in order to be clear-headed enough to help the families through their grief. As a teacher, I had to deal with teenage hormones and yet inspire my students enough to do their best. I had to be different “characters”, so to speak, in every profession. I think that helped me think differently and be able to write for different personality types.

Your writing has been compared to Janet Evanovich and Diane Mott Davidson. Are they two of your favorites? Who are some other authors you enjoy?
Janet Evanovich is definitely one of my favorites. I also enjoy Michael Connelly, Meg Cabot, Kristan Higgins, Wendy Roberts, Gemma Halliday, and the lovely Jami Deise! I’m still reeling from the big finish of THE TIES THAT BLEED.

Thanks so much, Caroline! And of course you can get TIES by clicking on this hyperlink! 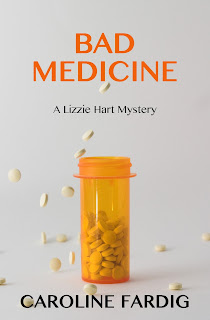 What do a smokin’ hot detective, an evil chiropractor, and a couple of blind dates from hell have in common?
Lizzie has to wrangle them all in the third book of THE LIZZIE HART MYSTERIES series!

Lizzie Hart is overjoyed that six whole months have passed without a single murder in the sleepy town of Liberty. It’s also been six months since Blake Morgan heartlessly dumped her, but she’s determined to get over him. She’s slimmed down, ready to party, and injury-free, except for a little nagging pain in her ankle. She’s also very single, but her friends are doing everything in their power to fix that—including setting her up on one disastrous blind date after another.

Lizzie’s reprieve is short-lived when an old friend of hers is found dead from an apparent drug overdose. She wants to write it off as bad behavior after having seen the guy cheating on his wife with the new chiropractor in town. However, when she sees that same chiropractor playing doctor with another man who ends up dead, she worries there could be murder afoot.

Doing her best to stay on the right side of the law this time, Lizzie decides to go straight to the police with her suspicions. Unfortunately, the only cop available to speak with her is the stern yet hot new detective who has already given her a traffic ticket and a reprimand for public intoxication. Not surprisingly, he brushes her off, leaving her no choice but to begin snooping on her own. Lizzie soon learns she’s going to need help to get to the bottom of this mystery, but her best partner in crime solving, Blake, has turned into her worst enemy.

Can Lizzie and Blake find a way to work together to catch the killer…or will they kill each other first?

BAD MEDICINE is up for grabs! Here’s the rafflecopter!


Amazon link for Bad Medicine: (It's Amazon exclusive for now.)

About the Author:
CAROLINE FARDIG is the author of the LIZZIE HART MYSTERIES series and the forthcoming DEATH BEFORE DECAF, available November 2015 through Random House. Her eclectic working career included occupations of schoolteacher, church organist, insurance agent, funeral parlor associate, and stay-at-home mom before she realized that she wanted to be a writer when she grew up. Born and raised in a small town in Indiana, Fardig still lives in that same town with an understanding husband, two sweet kids, two energetic dogs, and one malevolent cat. 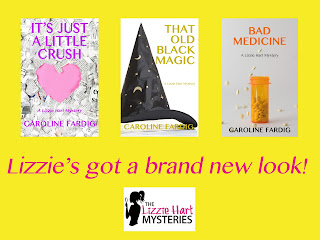